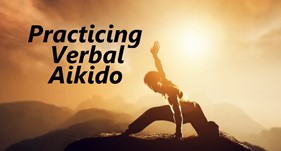 First a quote: “Fight for the things that you care about. But do it in a way that will lead others to join you.” – Ruth Bader Ginsburg

First, let me fully admit I know next to nothing about martial arts; perhaps only that it can take a lifetime to master. And, what I share here is based upon a long-ago memory and a little recent research. I know just enough about this topic to know; I wish I knew more.

Today’s article begins with my attendance at a leadership development conference in the mid-80’s. I have never forgotten one of the more memorable concepts I learned at that event. One of the presenting speakers was an expert in both martial arts (Aikido specifically) and leadership development. As part of his presentation, he gave a live demonstration of Aikido, a popular form of the martial arts.

Aikido (pronounced “eye-key-doe”) was originally developed by Morihei Ueshiba, (in the 40’s and 50’s) and is now practiced in more than 140 countries. Here is what I found fascinating; Morihei Ueshiba’s goal was to create a marital art that could be used to defend oneself, while showing concern for the attacker’s well-being. Imagine, being concerned about your own personal safety, AND that of your attacker!

A core principle of Mr. Morihei Ueshiba’s philosophy, as I understand it, is to overcome oneself instead of cultivating violence or aggressiveness against an attacker. Aikido has been translated as “the way of unifying,” or as “the way of harmonious spirit.”

Acknowledging my drastic oversimplification of the century’s old martial arts, Aikido is based primarily upon turning and spinning one’s body in a way that redirects an attacker’s momentum. By turning to dodge the full force of a kick or punch, the attacked can spin harmlessly away and redirect the attacker’s energy in a manner that is safe for both parties. Click here to watch a video demonstration of Aikido

While I understand Aikido has evolved over recent decades into other variations and approaches, most still retain a concern for the attacker’s well-being as well as one’s own personal safety.

I’m struck by the similarities to emotional intelligence, at least as I understand and teach the concept. Being more self-aware and managing one’s personal emotional reactions to others are core components of EI. Having the ability to redirect emotional energy in a way that is helpful, and not harmful to either party, is a powerful skill we should all practice and develop.

On this subject, I have found the communication skills, originally researched, and studied by Jack Gibb in the early 60’s, to be most helpful in practicing what I’m describing as verbal Aikido skills. Mr. Gibb discovered six supportive approaches to communication, that when used properly, create a safer, more respectful communication climate. He also contrasted those skills with approaches that tend to increase the levels of defensiveness and aggression in others.  See the chart below.

We always have a choice in how we communicate with others. Do your choices amplify a defensive climate or promote a supportive climate?

In what ways can you create a more positive, less defensive, communication climate with the most important people in your life… perhaps those people you work with, live with, lead and/or love? It is possible to communicate in ways that are respectful of yourself, and others. Let us all strive for that goal this week. How good are you at verbal Aikido?

How will you love, live, or lead, differently, or better, this week?

I would welcome the “gift” of your feedback: Click here for a 60-second survey.