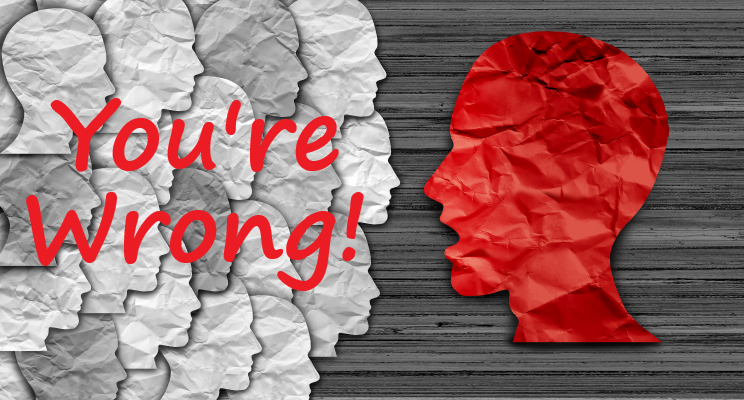 First a Quote: “Reacting in anger or annoyance will not advance one’s ability to persuade.” – Ruth Bader Ginsberg

Did you feel a bit defensive when you saw the title of this week’s missive? Did you almost decide not to click on it this week? Or just maybe, you opened the email ready to do battle with me. Please relax and let me explain.  And, by the way, I don’t think you’re wrong, just wanted to get your attention.

When facilitating workshops on how to be an effective coach, I often incorporate a visual demonstration to make an important point about persuading and influencing other people. The best I can do here is give you a brief description. Hopefully, I can describe it well enough for you to visualize, and feel, the impact of this simple demonstration of human behavior.

I start by inviting two volunteers to the front of the room.  I then ask them to stand facing each other with an opposing hand in front of them, approximately shoulder height. I then bring the two volunteers near enough to place their raised open hands together, hand to hand, kind of like they are doing a high five for an extended minute or two.

Next, I simply ask one of the two to begin pushing on the hand of the other person, who by the way, receives no additional instruction.

If you’re able to visualize this scenario, you already know what the “pushed-upon” person likely does without hesitation or conscious thought. The opposing person instinctively pushes back with an equal or stronger force, or at least has the desire to do so. This is a normal and natural human phenomenon; you push on me; I’ll push back on you. This is predictable human behavior many of us learned on the playground as children a long time ago.

And, interestingly, just as this “push-back” happens with physical pushing as I demonstrate in workshops, it also happens emotionally and psychologically. You call me names; I’ll call you names. You tell me I’m wrong, and I’ll point out why you’re more wrong than I am. Yelling easily begets more yelling. Emotions attract like emotions. Again, you push on me; I’m going to push back on you, even harder if I’m capable.

Don’t believe this is true? Spend five minutes on any social media platform of your choice and you will see evidence of this phenomenon everywhere.

In coaching situations, when a person’s level of defensiveness goes up, their receptivity to your well-intended coaching goes down in direct proportion. If you define leadership, not as a position or as title, but rather as having influence with others, then this is an important leadership concept to understand.

I submit when people feel “pushed upon,” their level of defensiveness goes up and their openness to other ideas and suggestions goes down. When their level of openness goes down, so does your opportunity for influence and impact. 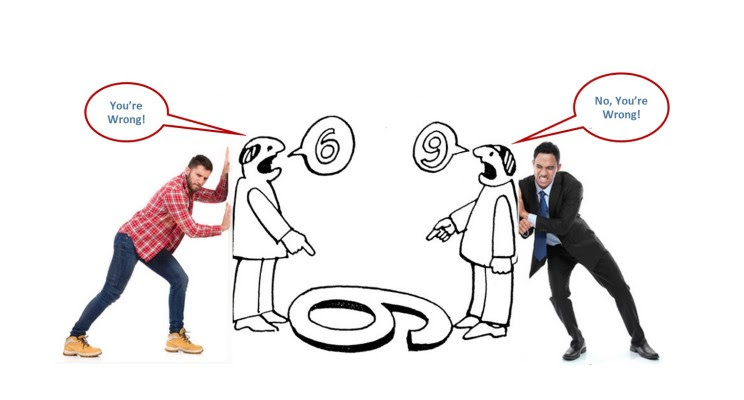 “It is a narrow mind which cannot look at a subject from various points of view.” ― George Eliot

We would all be wise to remember that it does not have to be this way! We can choose to thoughtfully respond rather than instinctively react.  At any time, we can consciously and purposefully, hit the “over-ride button” on our emotions, instincts, and normal human tendencies. One more time, we can choose to consciously respond or instinctively react. It is always a choice!

I had a conversation with a good friend this week about how people, millions of us, are watching the same national news events, sometimes reported by the same media outlet, and yet come to vastly different conclusions.

I have always appreciated the 6 vs 9 cartoon above for that very reason.  While each of us tends to think we know the truth about the world, the truth is, our individual truths are limited by our individual experiences and our perceptions of those experiences. Even this statement is not a proven truth, it’s just a truth I have come to believe based upon my experiences.

As I said last week and numerous other times, I don’t pretend to know, or have, magic answers for the complicated issues facing our country and world. While I believe all of us have an individual role in determining our collective futures, I can only control what I think, what I say, and what I do.

I’m on a never-ending quest to become the best version of me, to make a positive difference in the world in which we all live, and to help others. This week, I’m determined to:

How will you love, live, or lead, differently, or better, this week?

We can dream bigger! And, we can do better!