I Demand to Know Your Name! 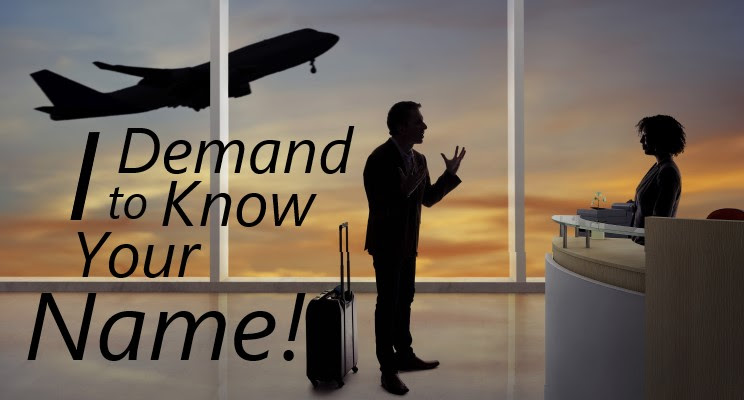 First a quote: “Man has no greater enemy than himself.” – Francesco Petrarca

I have always enjoyed people watching and, one of the best places for this pastime is at airports. People can be such a hoot to watch. (As I write these words, I’m humming the lyrics to Billy Currington’s country song… “God is great, beer is good and people are crazy”)  Unfortunately, it is not all that uncommon to see upset passengers yelling at gate agents; as if those agents personally scheduled a weather delay or intentionally made their lives miserable in some other way.

This past week I had just such an opportunity. I was waiting for a flight home from Portland, Oregon after facilitating a workshop on how to effectively conduct courageous conversations.  I wish I could have recorded the conversation I witnessed as an example of how not to have one of those conversations.

In brief, the published boarding time had passed, and the gate agent announced we would be boarding as soon as our flight attendants arrived from another inbound flight. She didn’t expect it to be more than a few minutes, and because it was a small plane, she anticipated not only an on-time departure, but also an on-time arrival in Boise.

Almost immediately, an angry passenger wanted the gate agent to know he had made the effort to be at the gate on time and expected to be boarded on time as well. Anything else was rude and an inconvenience in his life. His volume escalated and his voice become angrier. He soon stomped off in disgust only to return to the area in time for the delayed flight attendants’ arrival at the gate.

He demanded to know how they could be so rude as to keep him waiting and delaying his timely boarding of the flight. I was impressed with the gate agent’s ability to stay calm and continue to assure the angry passenger of an on-time arrival at his destination.  It did no good; he had decided he had been wronged and somebody should pay, yelling, “I demand to know your name!”

Two things were obvious to everyone, but him, in the gate area; 1) his arguing was only furthering the delay he was so angry about; and 2) the evening was not going to end well for him.

Click here to read: “Are My Problems My Fault?”

Click here to read: “You Make Me So Angry!”

I suspect it is possible, that today as you read this missive, that man is somewhere telling the world how he was mistreated by that airline and its employees; completely oblivious to the ramifications of his own rude and discourteous behavior. Sometimes, especially when we’re angry or upset, we can be our own worst enemy. He certainly was; they denied him access to the flight and we departed without him.

I have learned as a spouse, parent, friend, neighbor and leader, that during those stressful times when we need to be our “very best selves” unfortunately, we’re often at our worst. When angry, we can easily get lost in our own self-righteousness and be completely blind to our own worst behaviors.

P.S. Just as the gate agent had predicted, not only did we arrive in Boise on time, we arrived at our gate 15 minutes early. And, where was that angry man when we landed? I suspect still in Portland, probably still trying to convince someone the world owed him an apology. If he could only see a “playback” of his behaviors that night.

Couldn’t all of us benefit from an occasional “playback” of those times when we believed our behavior was justified and appropriate? For me personally, that is a very scary thought. No doubt in my mind, I too have been “that man” in the past and I’m certain it was obvious to everyone but me.

How about you? How might you have benefited from being your “best self” when you were unintentionally “at your worst?” What were your lessons learned from that experience?

How will you live, or lead, differently or better this coming week?