Are My Problems My Fault 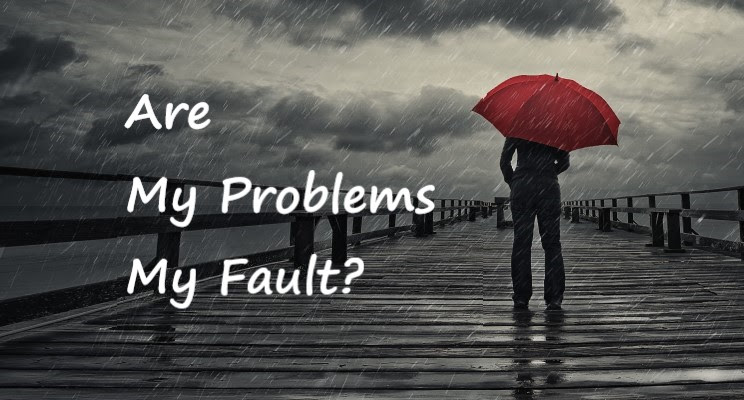 First a quote: “If you create your own storm, don’t get upset when it rains.” ― Unknown

It was earlier in the morning than any human should have to get up to catch a flight; but there I was, standing in line to go through security with dozens of people, all of whom looked like they needed an extra-large caffeinated beverage. We were all tired, and just wanted to be through the security line, on our planes, or better yet, at our final destinations.

Not long after getting in line, a woman arrived with a loud, angry voice, and an unpleasant demeanor. She was, in my opinion, both rude and arrogant. She apparently wanted all of us, including the TSA agents, to be fully aware of how we were going to be responsible for her missing her flight. The world, including what she described as ignorant and inept security agents, were responsible for her lateness. Because of us, she was going to miss her flight. This was, in my opinion, misplaced and mis-directed blame. None of us had anything to do with her arriving late at the airport.

In fairness to this woman, I don’t know anything about what may, or may not, have happened to her on her way to the airport; perhaps there was an accident on the freeway that caused her to be late. Maybe her car wouldn’t start, or maybe, her taxi driver didn’t show up as promised. It is hard to say, and I’ll never know. Her behavior, however, led me to believe this behavior wasn’t unusual for her. This morning, she certainly appeared to be blaming others for her situation, at least for the probability of missing her flight.

I suspect she, at least partially, owned some responsibility for her late arrival at the airport and wasn’t willing to acknowledge her part of the problem. She most likely didn’t start her day early enough or simply overslept. Maybe she didn’t pack her bags the night before or wasn’t ready when the taxi driver arrived to pick her up. All I know for sure is that she was acting as if all of us were responsible for her missing her flight, that the world was conspiring against her. Even if something else did happen that morning beyond her control, she exhibited no ownership for her response or current behavior.

How many people do you know who share similar attitudes; “Nothing is ever their fault.” Have you ever heard anything like the following?

Years ago, I learned of a conceptual approach to life called “100/0% thinking.” It is nothing more than a “personal operating philosophy.” It is not always right, and it doesn’t always work. It does however, separate leaders from the rest of us. It is simply a way of thinking and responding to life. The approach is to ask yourself questions like, “What if I were 100% responsible for my actions and my future responses, what actions would I take? What if I, and I alone, were responsible for my reactions to the situations I face? What if I were 100% responsible for my future? How would I think differently? How would I act differently?

For clarity, this philosophical approach does not suggest we inappropriately assume responsibilities for the negative actions of others. Certainly, there are an infinite number of situations where people have been victims of unfortunate and awful situations, which were out of their own control. My prescribed philosophy does not apply to those situations beyond our control, nor does it suggest we our responsible for the behavior of others. It does, however, suggest we are responsible for our own actions and reactions. Truly being a victim, and having a “victim mentality,” are two very different things.

Any time we blame others, even if justified, it gives those people, power over us; it empowers the people we blame while simultaneously disempowering ourselves. And perhaps more importantly, once we’ve placed blame somewhere else, it limits the options and possibilities we see for actions that could move us onward and upward. If conceptually I were 100% responsible for a given circumstance, what actions might I have taken, either to avoid, or to resolve the issue.

Repeating, this is a simple but powerful philosophy, a way of thinking and responding to life. I suggest giving it a try, you will be amazed at how life-changing it can be. William Johnsen expressed this way of thinking with ten, very simple, two-letter words: “If it is to be, it is up to me.”

As always, how will you lead differently, or better, this coming week?