Below the Deck Matters! 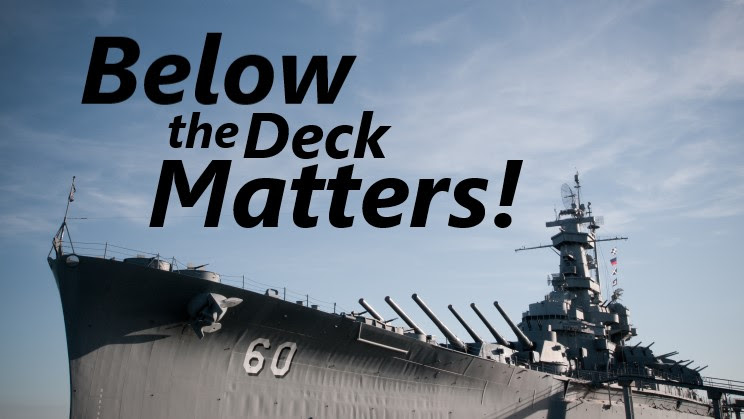 First a quote: “The most important thing a captain can do is to see the ship through the eyes of the crew.” Michael Abrashoff

I read the book “It’s Your Ship” by Michael Abrashoff more than ten years ago and had it on my recommended reading list for a long time. Mr. Abrashoff published an updated edition in 2012. If you are interested in the subject of leadership, it is worth a read or two.

In 1997, Michael Abrashoff, at age 36 became Commander of USS Benfold, (a guided missile destroyer) making him the youngest commanding officer in the US Navy’s Pacific fleet. He took over a ship with low morale, high turnover, and an abysmal performance record. By many accounts, it was one of the worst performing ships in the Navy’s Pacific fleet.

Within one year, the USS Benfold earned honors for being one of the highest performing ships in the fleet and even earned the Navy’s coveted Spokane Trophy. The ship’s retention rate for sailors—those who signed on for another tour of duty—leapt from 28% to 100% during that same time frame.

While the book is filled with powerful leadership lessons described in thirteen chapters, my focus today is regarding his quote above: “Seeing the ship through the eyes of the crew.”

I have learned similar lessons over the years while conducting and analyzing organizational culture surveys in dozens of organizations. Those lessons include (continuing with the nautical theme & metaphor):

Over the years, I have seen leaders use dozens of personalized techniques for building relationships and growing trust with the people they lead. Mr. Abrashoff frequently ate in the mess hall with his sailors, shunning the captain’s formal dining quarters. He would stand in the grub line waiting his turn just like everyone else. He used the waiting time to chat with the sailors and get to know them.

One of my clients is a large manufacturing organization. Their corporate culture was shaped and heavily influenced by the founding father of the business. He frequently walked through their factories visiting with machine operators and people on the front lines. He loved the work, he loved the workers and, according to those who were able to work under him, it showed.

When I worked at the HQ of a large, unionized retailer the company president would often spend time “hanging out” with union warehouse workers under a large tree near the employee parking lot. He knew most of their names and even some of their children. Click here to read: He Knows My Name! | LinkedIn

He had no agenda other than to get to know them. Sometimes they talked about work, sometimes they just talked about the local baseball team. In either case, the personal connections that he established allowed him to be more in touch with the workforce, and make more informed decisions on things that would impact the day to day operations of the company.

One of my clients has set up a monthly virtual forum where workers can ask questions of the senior leadership team, or present ideas for making things better. This has enabled greater involvement in the decision making process from all levels of the organization.

In many organizations it is not easy to bring problems to management. Leaders must make it safe, non-threatening, and even inviting for people on the front line to talk to them. Don’t make them come to you. It is your responsibility to see your business through their eyes.

How will you see your business through the eyes of your workers this week? Maybe it is time to go below deck.