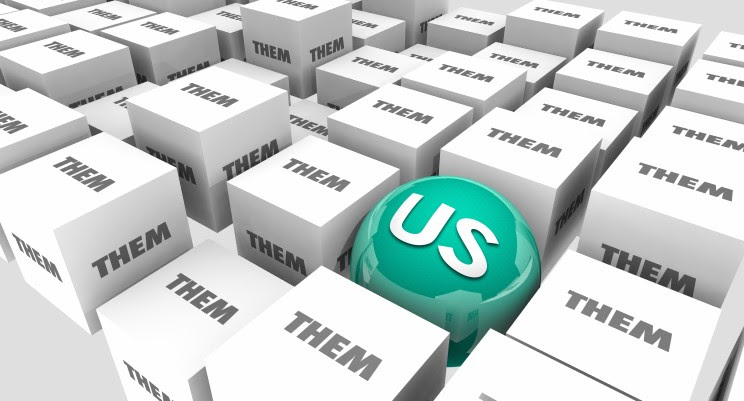 First a quote: “If we see the world as US versus THEM, we can convince ourselves that US is better than THEM.” – Coach Kim Giles

This week, I briefly explore a subject related to “Us versus Them” thinking. It is a phenomenon known as “group think” researched originally by Irving Janis, a research psychologist from Yale University in the early 70’s.

As defined by Wikipedia, Groupthink is a psychological phenomenon that occurs within a group of people in which the desire for harmony or conformity in the group results in an irrational or dysfunctional decision-making outcome.

Irving Janis identified eight symptoms of groupthink. In the interest of brevity, I have chosen to highlight only four of the eight in this missive:

In the early 80’s I worked in a unionized company in a predominately unionized city in the Midwest. At the time, I worked in human resources and had a role in labor relations. On the organizational chart, I was a member of the “management group” which was responsible for leading and managing a “unionized workforce.”

During that time, and in that role, I saw clear evidence of Jarvis’ “groupthink” symptoms outlined above. I saw firsthand how both “groups” were guilty of:

As a labor relations professional, and formally, a member of the “management group,” my role was also intended to represent the members of the “workforce group” in a united search for better decisions, actions, and solutions which were “right” for all involved. Together, we needed to overcome a history of “bad blood” in the exploration of trust, mutual respect, and appreciation. We were members of one company but acting like opposing forces with nothing in common. Ultimately, we had to find a better way of working together to come together in a fight against common enemies while striving for common good.

One of our most successful efforts to shape a more positive culture was designed to break down barriers between the two groups.  Our goal was to help members of both groups see each other as people with common dreams, hopes and aspirations; to discover, that while differences certainly existed, we also shared much in common as human beings. While sometimes difficult to see, there were many reasons for coming together in pursuit of a common cause and the building of a better world.

In brief, we set up a long-term effort to build relationships across both groups. Managers were asked to invite union members, one-on-one, to have coffee or a soda together at least once a month. The purpose was to get to know each other as people. They could talk about sports, their families, vacations, hobbies, or whatever they were comfortable sharing, anything but work was fair game. It was about connections and relationships.

Progress was admittedly slow. It took time to overcome years of distrust and suspicion of each other’s intentions and motives. But make no mistake, we did see improvement as trust and respect increased over time. Grievances dropped slowly as first and then more dramatically as time went by. We also saw a marked increase in productivity, service to our outside customers and morale improved as well.

Changing a culture is not easy, a quick fix, or without difficult decisions. As members of the “management group” we had to look at ourselves objectively and introspectively. We had to look ourselves in the mirror and identify where our personal beliefs and behaviors were contributing to the problems we faced. We also had to “part ways” with managers who couldn’t adjust their behaviors or let go of their paradigms of the past.

There are lessons to be learned from this one small example that could be applied to the divisiveness within our country at this time. Someone once said, “If you’re not a part of the solution, you are a part of the problem.” Please remember, when you point an accusatory finger of blame at someone else, or at another group, there are three fingers pointing back in your direction.

I don’t pretend to know what the solutions are, or where, or how, to begin healing our wounded country. I just know that continuing to do what we’re currently doing is not a recipe for change or success.

I do know we can dream bigger. We can do better. Let’s not go back to normal, but forward to better.

As always, how will you love, live, or lead differently, or better, this week?

Have a great week!!