First a quote: “We can’t solve problems by using the same kind of thinking we used when we created them.” ― Albert Einstein

We face many difficult problems in our world today. I suspect many, if not most, of our businesses do as well. I’m fond of saying, “All of the easy problems have been solved a long time ago. The problems we face today tend to be difficult, complex and challenging, at least with our current best thinking. We will likely require new thinking, and new mental models, perhaps by new people everywhere to solve them.”

Simply put, looking forward, we will need to think differently. As someone has already said, “Old ways, and old thinking, will not open new doors.”The challenges we face might only be solved with new paradigms, innovation and creative problem solving.

Paradigms are mental models that shape our thoughts, direct our behaviors and limit our thinking about new solutions to old problems. In the early 90’s, Joel Barker, a self-described futurist, popularized the word paradigm into a common business buzzword. Joel’s insights are powerful, they are also reasons for hope and optimism.

One of his many insights: “What is impossible to do with one paradigm, might be easy to do with another.”  Examples of this are everywhere:

In 1899, Charles Duell, Commissioner of the US Patent Office said, “Everything that can be invented, has been.”  All of these were once commonplace beliefs and paradigms.

Think about automobile racing for just a moment. In 1950 it was considered a major accomplishment to complete a full pitstop during a live race in less than a minute. How do you think pit crews would have responded if their crew chief would have told them to complete their work in under 5 seconds? I submit they would have thought, “Impossible! Can’t be done!”  If you have an extra two minutes, watch the video below contrasting two different pit stops… it will make you smile. Again, different paradigms. 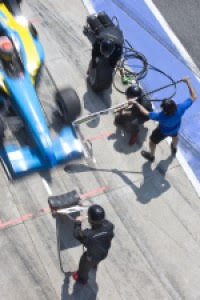 If you watched the “Pit Stop” video, you will understand lots of things had to change to make a “5 second pit stop” possible. New procedures and equipment had to be invented. Rules had to be changed. Staffing limits and budgets changed.  Most importantly, mental models had to be changed! (As an fyi, the official world record belongs to Red Bull’s F1 team with 1.92 seconds during the 2013 USA Grand Prix. Red Bull’s pit crew changed all four tires on Mark Webber’s car in only 1.92 seconds, helping him to win the third position in that Grand Prix.)

One of my favorite questions to ask seniors leaders today is, “What is impossible to do today, but if it could be done, would change your world, (or rock your competitor’s world)?  I learned this question from Joel Barker’s popular video “The Business of Paradigms”.

What mental models are holding you back? Your company? Our country? Our world?  What about self-driving cars, space travel, hyper-conductivity, inexpensive desalinization? There are so many paradigms yet to be discovered, replaced or shattered!

“People who say it cannot be done, should not interrupt those who are doing it”. ― George Bernard Shaw“

“Nothing is impossible, the word itself says ‘I’m possible’!” Audrey Hepburn

And, as always, how will you lead differently, or better, this coming week?